The Beijing Consensus is said to be a win-win for China and Africa. China has become a major force in global telecommunications markets, as a manufacturer, a content provider and in delivering services to its citizens. While the relationship between China and Africa has been explored in many areas, telecommunications has been ignored, despite its strong domestic performance, as well as the presence of Chinese equipment in African networks and in the hands of consumers. China has not exported its domestic model of competing state-owned operators, nor have those operators followed the "going out" strategy. However, manufacturers have benefitted from the Washington Consensus model of oligopolistic markets. In countries with higher risks, they have been aided by Chinese development banks and intergovernmental agreements. In a new policy model, for the Comoros and Ethiopia, Chinese firms have taken on outsourcing of network functions for the state-owned operators. Additionally, manufacturers have found several channels to supply feature-phones and smartphones at low prices, helping to widen access. Absent from African markets are the providers of Internet content and apps. There is very little evidence of spillover effects, with little knowledge being transferred. China has won from hardware sales in Africa, while Africans have won wider access to telecommunications, including states rejecting the Washington Consensus model. 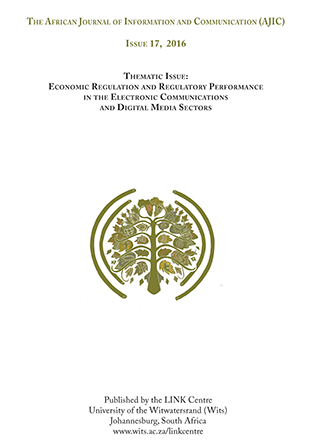 This work is licensed under a Creative Commons Attribution 4.0 International License.

Powered by OJS and Supported by Khulisa Journals Platform